I thought about making some kind of clever introductory joke about biting off more than you can chew, but I thought I might utilize the 1:1000 picture/word ratio efficiency. 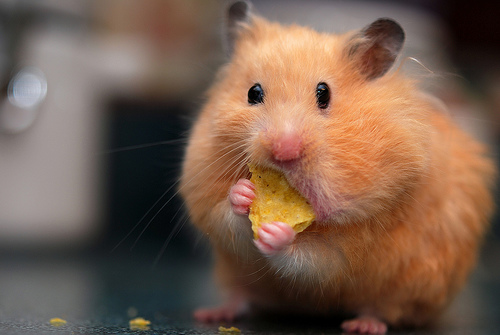 That’s about how I feel right now, except picture that there are 12-15 more chips scattered around this hamster’s (gerbil? Who cares?) feet, each of which need eating.

I am a hamster that is irrationally passionate about those chips.  They are facets of my life; they bring it meaning, they bring it wealth to chase away financial worries, they bring companionship.  But not all of the chips were created equally; there’s one huge one right in the middle of everything that looks like it would take, I don’t know, forty hours a week to eat.  It’s pretty hearty – full of nutrients, and it tastes okay – but it’s sort of the life equivalent to a military Meal Ready to Eat (MRE).  It gets you what you need, but it makes pooping an adventure.  Sometimes, in the MRE bag, you get skittles.  Sometimes you get something resembling tree bark.  Most of the time, though, it’s pretty boring.  While it sustains you, you feel perpetually drained, like a zombie who only eats skinny people.

But there are other chips too.  The chips that are the tastiest, CHOCOLATE chips.  If you eat too much of them, you’re going to spoil your belly.  Or you’re going to spend so much time eating one of those chips that the rest of them are going to rot, and you’ll wonder to yourself one day “why the hell did I spend so much time eating THAT chip when I should have been focusing on THAT chip?  Wasn’t the tostito with the bean dip (my family) the most important? ”  Or wondering if you’re making a mistake by focusing so hard on the chip labeled “your artistic career” and that you’re a lunatic for thinking of giving up that giant, menacing 40-hour-a-week chip that you have to eat EVERY FUCKING WEEK UNTIL YOU RETIRE OR DIE BUT AT LEAST IT KEEPS YOU HEALTHY IF NOT PRECISELY SANE.

Then there’s lots of little chips scattered around on top of the bigger chips.  Bills.  Long, meaningful discussions with your wife about where you’re going to raise your family, and is it going to be where you are now, and why can’t we just live in Japan in a house with a lot of sliding doors, and where is the fucking SUN around here?   Little chips that, really, taste like another hamster came by and wiped his ass on them in some cruel prank, but they’re your chips so you have to eat them anyway.  Health insurance.  Car maintenance.  Instrument maintenance.  House repairs.  Realizing that you aren’t very good at those house repairs.  Realizing that you probably should have called an expert about those house repairs.  Realizing maybe tearing out part of your kitchen floor (and part of your kitchen wall) was probably a bit short-sighted.

Ultimately at some point you have to realize that your stomach is only so big, that you should try to eat as much of stability and responsibility as you can without making the rest of life tasteless.  And, most importantly, that sometimes you have to put the goddamn chips down for a day or two and fast for a few days so that you have the mental capacity to keep living.

Of course, while you realize that, you’re still not going to do it.  Because you have a family to feed, cheeks to stuff, chips to eat, and a dream to pursue.  You just hope that you’ll catch yourself before you start to fail at all of it at once, hope that that editor will get back to you soon about that book deal, hope that your voiceover career starts to gain momentum, and hope that stepping off the plank of the 9-to-5 grind lands you in tropical waters instead of chummed waters with fins (not dolphin fins) sticking out of it.

And that’s about where I am right now.  I’m a hamster with really full cheeks trying to grab a bunch of chips, standing on the edge of a plank (how the fuck did I get on this pirate ship?) and wondering if I ever actually learned how to swim.   I know it’s temporary – at least as temporary as I make it, maybe – but I’m ready for this 16-hours-of-work-a-day push to end and for my life to decide, once and for all, why a hamster is eating chips in the first place when everyone knows they eat other hamsters.