I told my wife a thousand times I would never, ever in a million years move to California. Then I became a voice actor. For more great tips on how to get started in voice acting and how to refine your craft, click the subscribe button below and make sure to hit the bell so you get notified when I post a new video every week.

I’m Joe Zieja, former air force captain, and now a voice actor and author in the Los Angeles area. I’ve let my voice to thousands of videos, commercials, animated cartoons all over the place, and I’ve done quite a bit of it from my home studio. But now that I’m in Los Angeles, I’m all over the place. In this video, I’m going to take you through three facts about Los Angeles and why it might be the right move for you if you’re going to get into voice acting. 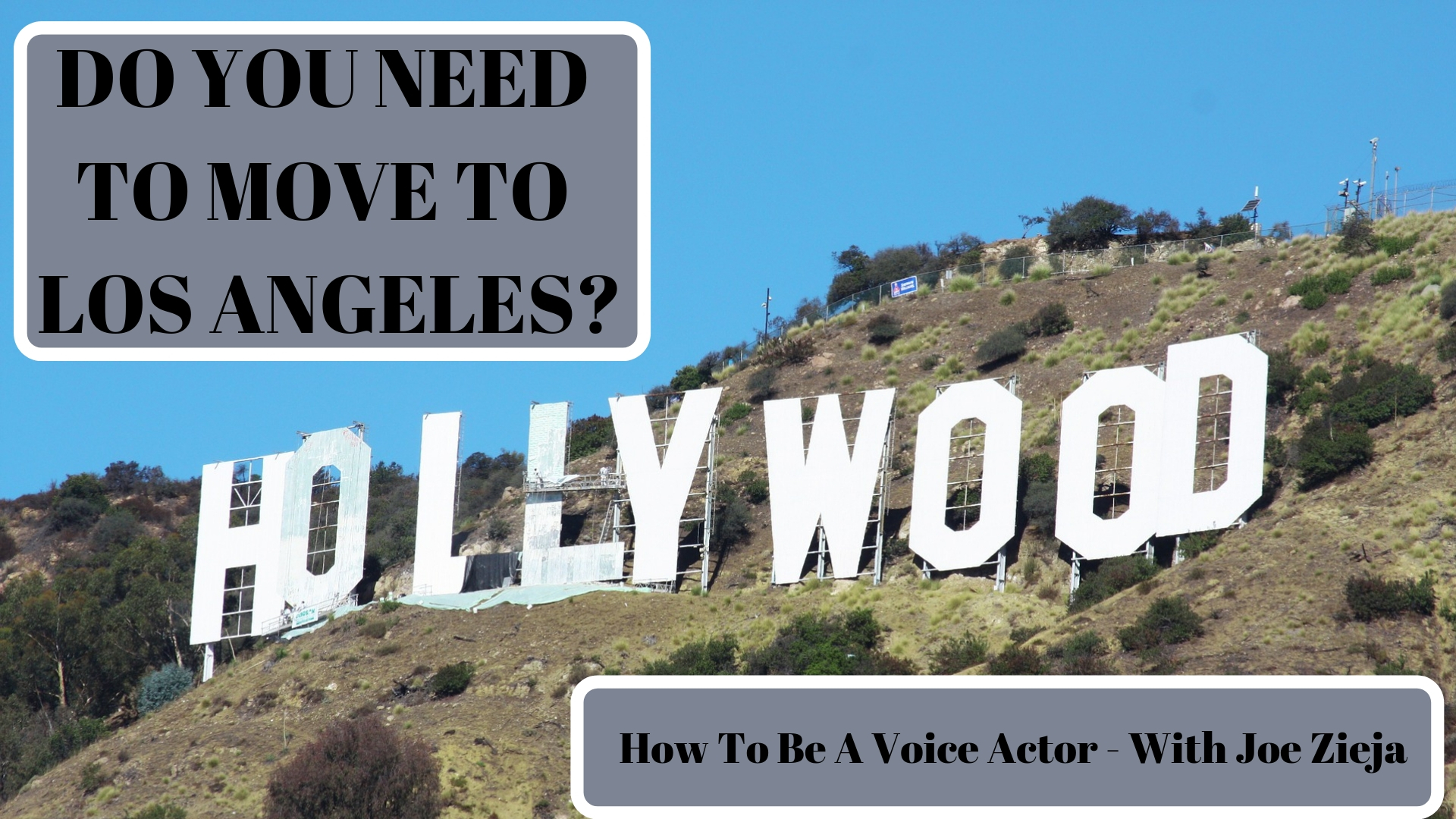 You’re diving right into a pool of extremely competitive talent and it’s going to be very, very hard to stand out no matter how good you are. The most common thing I hear from people when they get rejected from agents in Los Angeles is, “They said they already had somebody that sounded like me.” It’s probably true. Although each of us has our own unique voice print, we’re all lumped into categories and it’s going to be very difficult for you to stand out.

If you have trouble coping with the idea that you may experience long periods of rejection or long periods of not working, Los Angeles may not be the place for you and that’s totally okay. You can still pursue a voice acting career not in Los Angeles, although there will be some limitations that we’ll talk about in the rest of this video.

As a matter of fact, I spent about two years developing my voice acting career before I moved to Los Angeles and it’s served me very well when I came in because I came into Los Angeles with a pretty solid career and a solid idea of what I was doing. People ask me all the time, how do you become successful in Los Angeles?” My answer is always, you should be successful before you get to Los Angeles. What have you heard about acting in Los Angeles? Post it in the comments below. Let’s have a rumor mill.

Fact number two, you could earn more, but you will spend more. It is a fact that Los Angeles is one of the most expensive places in the country, if not the world to live. Renting a two bedroom apartment in the middle of Hollywood where it is noisy and crazy and insane is going to cost you like $2,000 a month. So, you need to be prepared before you come out here that you’re going to spend more on housing.

That being said, in Los Angeles you now have access to some of the most powerful agents in the world. You have access to the most high paying job opportunities in the world. The career opportunities are huge. They are larger than what you’d find outside of Los Angeles, so it’s kind of a gamble. The union even has an extra pay scale for LA talent. LA pay scale is more than a pay scale for anywhere else in the country because people are willing to pay for Los Angeles talent.

Fact number three, and this was the big one for me. If you want to get into video games, animation and anime, that sort of thing, Los Angeles is the only place to be. With a few exceptions ff course. For me, this happened about two years after I started my career. I was doing very well. I’d quit my job, I was full time working for myself from home and I was talking to my manager at the time. I said, “Well, what am I doing now?” She said, “What do you want to do?”

I said, “I really want to get into games and animation. Games are my passion. I’ve been a gamer my whole life, I want to get into games” She’s like, “Pack your bags buddy, you’re moving to Los Angeles.” With very few exceptions, the video game and cartoon industry is all here. Everything is here. Cartoon Network is here, Nickelodeon is here, ES, all sorts of stuff. Sony, everybody’s here in Los Angeles.

There are some opportunities in New York and there are a few opportunities in Chicago and some in Texas for anime, and there’s a little bit of a small gaming community in Texas as well. But for the most part, if you’re going to go full throttle and you want to get into video games and animation, Los Angeles is the only place to do it.

Most studios won’t accept home studios from other parts in the world. They want you there with their directors. Sometimes you’re going to be working in a full motion capture suit and they obviously can’t film that from the other side of the world. Or, you might be working in an ensemble where there are eight actors in the same room recording the same script. For all that kind of stuff, you got to be in Los Angeles.

There you have it. LA is like a big casino; lots of risk with the potential for lots of reward. It’s going to cost you a lot more to live out here, but the potential to get bigger gigs and bigger opportunities and jump into video games and animation may be the deciding factor for you.

I wouldn’t change my decision for anything, but if you’re looking for a lower budget lifestyle with a lot less pressure and a lot less chaos and you’re not interested in video games and animation, then Los Angeles may not be the place for you, and that’s okay. In my video series we’re going to talk about all the things you can do to build a stable voiceover career from your home, so don’t worry about it.

But I got to tell you, the weather is pretty good. Here’s a question for you, what’s one thing you would miss about your current location if you did decide to move to Los Angeles? Post it in the comments below. That’s a wrap everyone. I encourage you to follow me on social media for more tips, tricks, and behind the scenes looks into a life of a voice actor in Los Angeles.

You can find all those links in the video description below. Make sure you like and subscribe if this video helped you and let me know in the comments below. Don’t forget to hit the bell icon so you get notified when I post a new tip every week. Thanks for stopping by. I’ll see you in the booth.